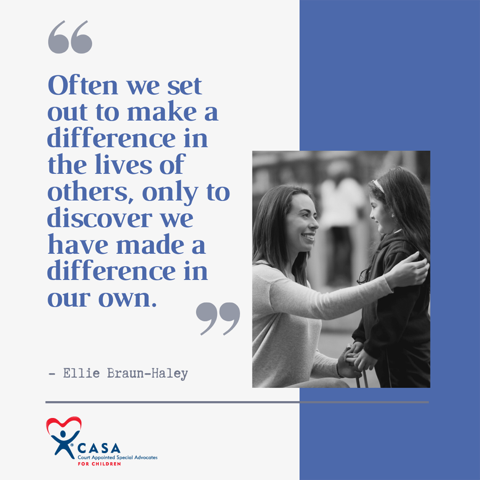 I have to admit I am a sucker for a good “story” of adversity and triumph — especially if it involves a child. Who doesn’t want to see a child, who is in a tragic situation through no fault of his or her own, overcome adversity and find goodness in the world? But, who are those people willing to devote their time to help a child?

I always thought I would be one. After hearing a friend’s adoption story, I seriously looked into adopting a child after having three of my own. I was so fortunate to have the resources to add another person to my family. But then the bottom dropped out of my own life, and I found myself raising three children by myself for the past 10 years. Unlike so many single moms, I was fortunate enough to have the financial support I needed but I was emotionally drained. Needless to say, I never acted on my “best intentions.”

I often wonder, what character trait separates those who think of themselves as good people willing to help others (like me) and those who actually make the commitment? Who are the people who volunteer their time, energy and, perhaps most importantly, their heart to better the life of a child?

Revel is proud to introduce two such devoted women during its “CASA: Making a Difference” virtual session on October 1, 2020 at Noon. One of the women is Nkia Richardson, the Executive Director for CASA of San Mateo County.As a lawyer in the San Jose City Attorney’s Office for nearly two decades, Nkia witnessed the best and the worst of our justice system, often representing children in child abuse and neglect cases. She worked closely with the Court AppointedSpecial Advocate (CASA) program to ensure her young clients had an adult dedicated to guiding a child’s successful journey through an often precarious system. So impressed with the organization, Nkia joined its board and served for five years before stepping down from the City Attorney’s Office and stepping up to lead CASA of San Mateo County as its Executive Director.

“I can't think of a better way to spend my days than having the opportunity to lead our local CASA program,” she says. Her goal: to help ensure that every child under the protection of the court has a caring and consistent adult to encourage them to reach their full potential.

One such adult, and our second featured Revel presenter, is Janet Zablock, an amazing volunteer advocate whose appointee is safely through the court system and became a first-generation college freshman this fall. Janet has that character trait that I am trying so hard to identify. The trait that motivates someone from considering how best to help a child in a meaningful way to actually dedicating the time and heart that is so needed to change the trajectory of a child's life.

I don’t want to give away too much of the substance of our upcoming talk with Nkia and Janet but, I can tell you, it will be inspiring. So please join us and encourage everyone you know to join us as well. Hearing their stories of heartfelt service might just make a difference to another lucky CASA child.

Learn more about the CASA program and hear directly from Nkia andJanet at the upcoming event Revel on Oct. 1st. Learn more and RSVP here.

Jill Layman is the Revel Community Lead for the Bay Area Peninsula, and helped coordinate the CASA event.